Lara also is founder and editor of Grits in the City

I always get excited when new food options open in Long Island City around work, because, as I’ve noted before, the pickings are slim. Though recently a few things, such as Burger Garage, have come onto the scene – and LIC Market unbeknownst to me recently opened. Currently the restaurant is open Monday through Friday, 7AM to 4PM. They have a full breakfast and lunch menu, as well as daily specials. They are doing brunch on Saturday only, with their hours being 11AM to 4PM. They’ve noted they will be adding dinner to the line-up as well as beer and wine later this Fall. Unlike some of the other options in the area, they actually have a full separate dining area in the back, which is a nice alternative when you want something a little nicer. 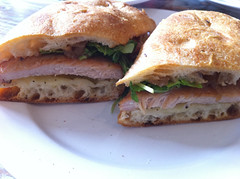 I was torn my first time there as I looked through their sandwich options. Roasted Chicken … grilled cheese … shredded brisket … slow cooked pork. All sounded intriguing, and ranging from $8-$9. I first tried their roasted chicken, which was served on souman bread topped with caramelized onions, provolone, arugula, and a roasted shallot dressing. The bread was perfect – not so stiff as to hurt to eat (you know what I’m talking about – I’m sure you’ve been a victim of vicious bread at least once!). The caramelized onions in particular paired nicely with the roasted shallot dressing. Roasting the shallots gave it almost a smoky flavoring. The only thing which surprised me was that the sandwich came solo – no accompanying salad, chips, or the like. It was sufficient on its own though for the meal.

The second time I visited, I tried their “grilled cheese”, opting to pay the additional $1.50 to add ham. The sandwich was prepared using port salut, a mild white cheese, which was nice and melted. I think it was a good addition, as it was not so strong to take away from the remaining ingredients. It was topped with apple, endive, honey-dijon, and a truffle oil. My only complaint (see above, think reverse) was the bread was extremely stiff. I was committed though and didn’t let that keep me from enjoying the sandwich. 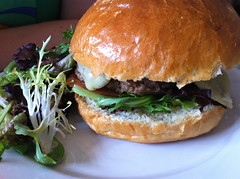 My friend ordered the Market Burger on one trip, which is served on a brioche bun with cheddar cheese, sliced tomato, greens, and aioli. It’s also accompanied by potato salad. The burger was a nice size – on the bigger side, but not ridiculously ginormous. Another trip, my friend tried their Roasted Chicken salad. The portion sizes on their salads are definitely generous and not bad with a price in the $9-$10 range.

LIC Market also has a market area in the entry which is not only where you pick up any “to go” orders but is actually a decent sized market featuring house made items and gourmet ingredients used in their menu selections. Excellent addition to the neighborhood dining selection. If it says anything, my visits were actually two days in a row.