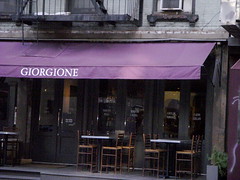 There are certain pockets of the city where it’s hard to determine where you are. Is it the East Village? Well, no not quite. Am I in the Upper East Side or Midtown East? Well not really either. Last week I found myself at the Classic Auto Club – not quite Tribeca, bordering on SoHo and not quite far enough North for the Meatpacking District. We had nice cars and a classy bar. Only thing missing? A dinner of comparable quality.

One of the best things I’ve learned dining my way around the city is the best way to get an appropriate recommendation. Don’t stop someone random on the street. And don’t pop into somewhere along the main shopping strip on Broadway in SoHo and expect the food to automatically be better than average or to even remotely stand out. Ask someone who has to be in that area regularly. Someone who’s likely made their way up and down the side streets to see which of the offerings is the best.

We asked the bartender, someone who looked like she’d know some good dining options. Instantly she named off Giorgione, a name not recognizable to me but sounding worth a visit. Nestled to the far west of SoHo, it’s definitely an area in which I’d never walked.

As we headed West on Spring Street, it would have been easy to pass right by it altogether. Surrounded by primarily bars and to the left of a very noticeably out of business pub, Giorgione only had a simple eggplant-colored awning, subtly stating it’s name in white letters. It looked small from the front, as if it would be nothing extravagant. Looks can be very deceiving. 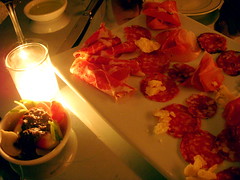 Upon entering, we found the depth of the restaurant went back quite far, and was packed from front to back with diners this evening even as 10pm was fast approaching. Everything was lit by plentiful small candles, giving the restaurant a warm consistent glow.

We started with some antipasti, opting for their salumi misti, which was a mix of different cured meats. It comes in three sizes and we went with the largest. Our server seemed to think we’d be overwhelmed, but perhaps it was because it was so good that it was not a problem. It had some spicier variations on salami, the more traditional, and a couple of varieties of prosciutto. It came with a sprinkling of fresh crumbled parmesan, but I have to say I enjoyed it even more with the sheep’s cheese we ordered as an additional item. It was a nice compliment to the meats, especially considering the figs which came out with the cheese. I’d highly recommend adding this in if you order this dish.

Their wine list is extensive. We were perusing the list, thinking we were viewing the entire thing, only to learn we were simply viewing the list of those glasses offered by glass or quartino. We ultimately went with a recommendation on a red, which was quite good (albeit a bit spicier than our original request). I believe it was a Montalcino, but at any rate, the list is extensive enough to satisfy the wine connoisseur with price variation to satisfy most any wallet. 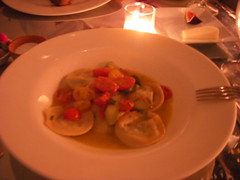 For my main course, I went with their ravioli of the day, which were thin round pillows filled with spinach and ricotta. The dish came accented with slivers of artichokes and small red cherry tomatoes. The butter sauce was very light. The dish was good, but I will admit I am not sure I would have been full if it had not been for the antipasti. My friend ordered the Costolette di Agnello, their grilled lamb chops which were accompanied by rosemary roasted new potatoes. The word was that that was very well done. Next time, I think I would opt meat over pasta or perhaps a pizza, as I have since learned they are known for their pizzas. I would highly recommend this spot as it is definitely a cozy hidden secret.