Lara is founder and editor of Grits in the City Clearly in keeping with my trend to visit romantic restaurants on girl’s night outs, I recently went one Saturday to Rayuela in the Lower East Side. I found the decor refreshing yet simplistic from the moment we walked through the door. The bar area was small on the right-hand side before you enter the main dining area, which continues up a set of stairs to a second level. There are a few white curtains and candles were lit throughout. Nice and elegant.

As much as I am usually a proponent of solo dining, I’d recommend this be a place you go with at least another person with you. Many of the plates are intended to be served tapas style and even those which are main courses can be easily split between two or among more if you want to be able to try more of the menu. I had read much of Rayuela’s inventive cocktail menu, but in the end it was the sangria that caught our eye. The blanca contained mint, limes, sugarcane juice, and Brugal Anejo. I always love to try sangria. No matter how many times I try it out places, it’s always different. I prefer white to red, even though I oftentimes find it too sweet. This was just the right touch of sweet, without being too sweet. It almost tasted like sangria trying to masquerade as a mojito. Highly recommend that if you come here, you consider giving this a try ($10/glass or $36/pitcher).

When we were looking at options for starters, my dining companions were very interested in their ceviches. I’ll admit, I’m not usually a big fan. I find oftentimes they’re just a loose blob of various chunks of seafood with pieces of fruit mixed in. If you’ve never had ceviche, it’s essentially citrus-marinated seafood, with the idea being that citric acid cooks the seafood while at the same time adding flavor. I had read about the variety of ceviches Rayuela offered and it had received rave reviews, so I figured it was an essential part of dining here. We went with the hamachi, which was yellowtail tuna served with avocado and orange zest in a wasabi citrus sauce. Sometimes I find if it is not well-prepared, tuna is too bland for my taste, so I figured if nothing else the wasabi should save it. I was pleasantly surprised. The tuna itself was very flavorful and paired with the wasabi, was absolutley perfect. Between this dinner and a recent dinner at BLT Prime (review coming shortly), I’m learning that perhaps I shouldn’t be discounting tuna and tuna tartar so much!

For a main course, we chose to split the Bass Chileno, which was a grilled Chilean sea bass with manchego yuca mangu and a chorizo-salsa verde salad. The portion-size ended up being perfect for us to share. I was a bit disappointed that the manchego was not a bit more prominent in the dish. The chorizo-salsa though was actually mixed in with the rice portion that accompanied the sea bass, which was outstanding. The strong flavor of the chorizo was a nice balance to the more subtle flavor of the fish. (I’ll confess I found myself missing the end of the rice moreso than the polishing off of the sea bass.) 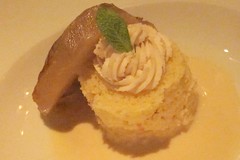 For dessert, we chose to go with two selections. At the time, my friend and I were about to be headed to Costa Rica and so I thought it was appropriate for her to be introduced to tres leches (here you can see the Costa Rican variation we would later encounter). Rayuela took a slightly different take on it, bringing pear into the mix. Their pear tres Leches takes the traditional tres leches mixture (a butter cake soaked in three kinds of milk – evaporated milk, condensed milk, and heavy cream) and adds white chocolate mousse and poached pear. The choice of white chocolate made it look the same as the traditional form and it also ensured the chocolate wasn’t overpowering, as the white chocolate was a very subtle addition. And the pear was great in that it was not too sweet and also because I find that adding a dash of fruit with a dessert somehow always makes me feel like it’s at least a bit healthy (a stretch, but I like this theory just the same). 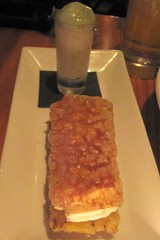 For our second dessert, we chose the Rayuela Colada, which was a layered vanilla cake with caramelized pineapple, passion mousse, caramel tuille and coconut tapioca. This dessert was interesing because the coconut tapioca actually came as a separate shooter to accompany the dish! It was more or less a vanilla cake sandwich, with a layer of passion fruit mousse in between. This was a very light and fluffy dish and the between the pineapple, passion fruit, and coconut, the colada reference was more than justified. Definitely confirm this is a place where dessert is a must. If you’re only looking to get one of the two, it’s a tough call. I’d have to give it to the pear tres leches, but just by a hair. Overall, I was very impressed with Rayuela. It’s not a spot price-wise I’ll hit up too regularly, but I found the dishes flavorful, inventive, and the space justifying it to be worth including in plans involving a nice evening out on the town.