Lara also is founder and editor of Grits in the City 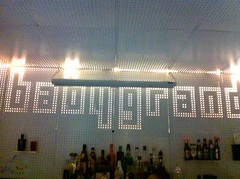 I love karaoke, no matter the day of the week. I really like it though on Friday because that’s a night I want to do something but don’t want to go anywhere too crazy. We arrived to Baby Grand early enough that I was able to jump in on the bartender’s dinner order for herself and another patron for delivery from La Esquina, a Mexican restaurant in SoHo that I’ve had on my must-try list for forever. It was ironic to try La Equina at the same time as Baby Grand, a karaoke place which has been on my to-try list for a long time as well – our last attempted trip (back closer when they first opened) having been a gigantic fail. Easy to happen though seeing as it is such a small venue. 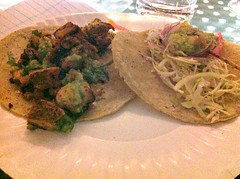 I was a little bit anxious that after all of the build-up that La Esquina would fall short (especially when throwing the delivery option into the equation). I knew I wanted to try a couple of their tacos, and I deferred to the experts, as they had both been there multiple times. I tried to order the “Bistec”, which was char-grilled marinated steak, onions, cilantro, chipotle salsa – sadly though they were out of the steak…). Instead, I had one of the “Carne Enchilada” (grilled achiote rubbed pork, cilantro, onions, pineapple, salsa verde) and the “Pescado A Las Brasas” (grilled market fish, shredded cabbage, salsa verde).

It was very interesting… the enchilada actually referred to the seasoning of the meat (something I’ve never experienced). However, no complaints from this direction seeing as the meat was so perfectly done. The pineapple was an interesting addition, but the sweet along with the sweeter onions balanced the more savory salsa and achiote rub. I also found their fish taco quite good. I’m typically a fan, but I found their fish (nameless – unsure what the “market” fish was this particular Friday, but they chose well). I was quite impressed – all that for $10 (including tip). Can’t beat that! Definitely want to make a reservation and head there in person…

Baby Grand is my new obsession – cozy and comfy, it’s easy to feel at home with singing here. And you can even look up their song selection online. How can you beat that? The second Tuesday of each month, they also offer live acoustic karaoke. I’m intrigued!