Couch potatoes are familiar with New York comedian Judah Friedlander from his roles on 30 Rock and Best Week Ever, but active types can go see his standup live this Thursday through Sunday (May 15-18) at Carolines on Broadway.

On stage, Judah plays the World Champion, a character who, quite frankly, is better than you at everything. On the phone, Judah calmly discussed impersonating himself, painting Sasquatch, and how you can buy one of his 30 Rock hats. 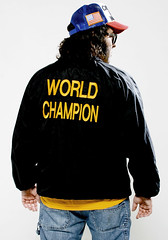 For the kids out there who haven’t seen your standup, can you give us an idea of what they’re missing?
Oh, they’re missing a lot. In my standup act, I talk about how I’m the greatest athlete in the world, how I bang a lot of chicks and how I’m a role model for children.

How often do people come up and want to buy your hat off you?
That happens fairly often. And I sell them on my website.

How much does a Friedlander original go for?
The World Champion ones are 20 bucks. If someone wants a hat I wore on 30 Rock , they have to email me and discuss a price. I make you an exact replica. Some are real easy to make and some are elaborate. It’s not some factory-made thing. It’s me sitting down and making it.

Has one ever been rejected by the show?
My hats sometimes have to be run through the censors. I wore one hat that said, “Balls.” It ended up being no problem, but they had to run that through. I’m like, “Why? It could just be basketballs or footballs.” Carrie Fisher was on that episode, and she said, “I just thought you liked going to balls. You know, to dance.”

I saw on your website that you also collect bad art.
Yeah, plus I make some art that people consider bad. One of the paintings I made was on 30 Rock. It was on the episode where I turned gay. Tina starts going out with this dude, and my character has a crush on him. The guy’s taking Tina to an art show, so I make a painting for him as a gift. That was a painting I’d actually made. It’s Bigfoot holding a one-armed mermaid that’s part unicorn. I suggested it to the writers, and they put it in the script.

Clearly you’re world famous now considering you’re on both the critically acclaimed 30 Rock and the cultural juggernaut Best Week Ever. What’s the weirdest fan interaction you’ve had?
As I was walking into the SAG Awards, one of the security guys kind of freaked out and was like, “Oh dude, I’m a huge fan of yours. I just wanted to say that. I love Lord of the Rings.” And I’m like, “Um, I wasn’t in Lord of the Rings.” And he’s like, “Oh, I thought you directed that.” And I’m like, “No, I’m not Peter Jackson, but thanks, dude.”

Do many people think you’re someone else?
There’s a guy at the pizza shop in my neighborhood, who’s convinced that I make a living dressing up like Judah Friedlander. He’s convinced I’m not me. He’s like, “How’s that impression stuff going?” I keep telling him, “No, it’s me.”

Does stuff like that happen often?
It’s happened a couple other times. I’ll be at a bar and someone says, “Hey, you look like that guy.” And I’m like, “Yeah, that’s me.” And they’re like “No way.” And I’m like, “Wait a second: So you think it’s more possible that you’re in New York, one of the entertainment capitals of the world, and it’s more likely that I’m a guy dressing up like me, than me.” And they’re like, “Yeah. But we think it’s really cool anyway.” You just can’t help some people.

To turn Judah into your own personal hatter, visit his website or roll on over to his MySpace page. After you see him live at Carolines, you can also catch him in movie theaters July 11 in the Eddie Murphy comedy Meet Dave.