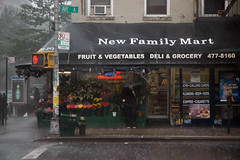 Today is Earth Day – the day when we guilt ourselves into reusing that cup at work and not running the water while brushing our teeth. While New York is getting dirty in some other ways, the talk of “going green” lately has been deafening. It’s a wonder that New Yorkers aren’t doing simple things that would not only cut back on our use of resources, but also save money. It all starts at your local bodega.

I don’t know how many times I’ve been offered things I don’t need. Even worse, I don’t know how many times I’ve had to specify to the cashier that I don’t need a bag. It should go without saying. Here are some simple guidelines that I think every bodega in New York should adopt. Not only will they save the earth, but they will save them money, which could be the biggest motivator of all.

I don’t think these are difficult rules to follow, and they could do a whole lot of good for our city.

Make it clear to your bodega cashier that you won’t take crap from anyone. And by “crap,” I mean, those non-biodegradable plastic products that you really don’t need.

Oh, and this summer, kick the doorstop out of the door if it’s being held open. That’ll learn ’em! Nobody ever said going green means going soft.