Somewhere in New York City, there is a clandestine group of females training at this very moment. These girls are improving their speed on eight wheels, honing their forearm blocking and elbowing techniques, and gearing up for monthly matches. What dastardly blood sport of hard hits and short skirts could these girls possibly be practicing for?

None other than roller derby, that classic 1970’s roller-rink sport which has come roaring back to life in a number of American cities over the past half-dozen years. 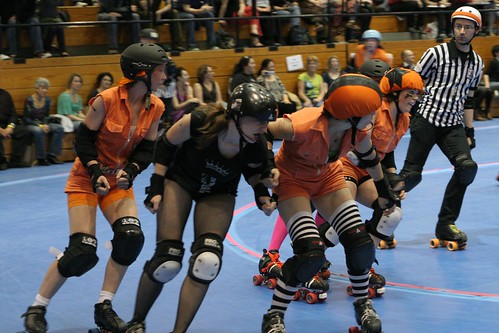 In New York, the main (if not only) outlet for girls interested in playing is Gotham Girls Roller Derby, founded in 2004. The club is wholly owned and run by the girls who play, and is a part of the Women’s Flat Track Derby Association. (Note: Flat Track means simply that there are no sloped turns in this style of roller derby.)

For those who are unfamiliar, the rules can be a little tough to pick up, but the basics involve two teams squaring off in a number of two-minute “bouts,” each involving five skaters. To score points, a team’s “jammer” must lap members of their rival team. The four non-jammer members of each team jostle with each other to try to block the opponent’s jammer from passing them, and thus scoring points.

While this might sound like packs of girls fighting on skates, the sport actually involves a heavy dose of strategy and lots of practice. There are rules about how exactly blocks can be executed, rules that are designed to prevent grabbing, tripping, pulling from behind, and back-handed slaps, among other things. Within the bounds of the rules, however, the game is still pretty hard hitting, and definitely fun to watch.

The Gotham Girls are broken up into four different teams – the Bronx Gridlock, Queens of Pain, Manhattan Mayhem, and Brooklyn Bombshells – and each of the girls takes on a roller derby name and persona for the bouts. Some good examples of this are Anne Phetamine from the Bombshells and Speed McQueen from the Bronx Gridlock.

Matches are held approximately once a month, and draw the crowd of twenty-somethings that you might expect to be interested in having a few beers and then going to cheer on a girls roller derby team. For those girls who want to be a part of the Gotham Girls and give roller derby a shot, tryouts are normally held in the late fall or early winter, and new team members are divvied up based on the needs of individual teams more than on a strict geographical basis. 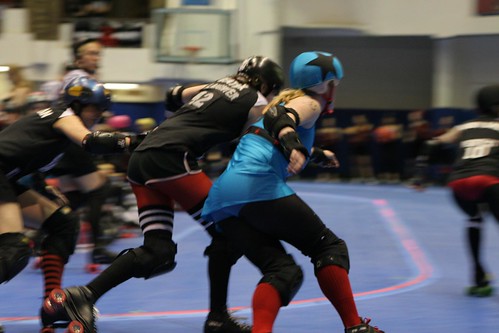 For the most part, members of the crowd are friends with one or more team members, though word of mouth about the league has grown, and many of their recent matches have sold out. The next match-up features Brooklyn vs. Queens on June 28th at Hunter College, tickets for which are available online. It’s a Saturday night, which should fit in with everyone’s busy boozing and sport-watching schedule, and I promise it’s a fun time of cheering, booing, bombastic claims during in-bout interviews, and, of course, skating.

Special guests have also been known to show up at the matches, as one of the Brooklyn Cyclone mascots appeared at the last match to root on the girls. If you’re still unsure if you should stop by and check out the event, just remind yourself of the basic elements: athletic girls, on skates, getting rowdy. End of story.